A Guide to Southwest Florida’s Birds

Amateur ornithologist or hoping to be? Birds are fascinating creatures that surround us nearly wherever we go, yet most know so little about them. Florida is part of a diverse network of ecosystems. The Atlantic Flyway stretches from Maine to Florida and from the eastern seaboard to the Appalachian Mountains, making Naples’ fruitful waters, wetlands and forests the perfect for over 500 species of birds. With a few tips, your binoculars, a field guide (or these days, a clever application) and your curiosity, Southwest Florida becomes a birders’ paradise. 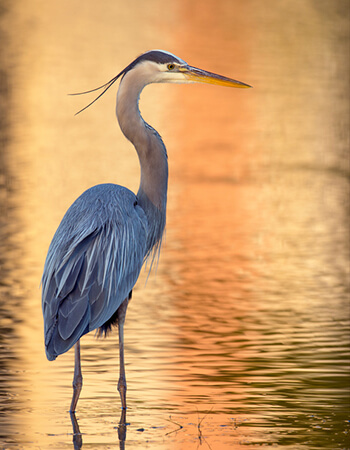 Birds You Can See in Southwest Florida

The largest groups of birds who call Naples home throughout the year belong to heron, egret, gull and tern species groups. However, hundreds more are visible in our area. Take our list of popular birds and turn a few days at the Naples Grand Beach Resort into your own personal bird scavenger hunt.

How to Identify Birds

Rather than looking for specific details, practice identification by actively using these four steps: size & shape, color pattern, behavior, and habitat. By knowing birds that are common to the area and learning to quickly recognize important characteristics, you can easily narrow your search to the right species group.

Whether or not you’re new to birding, a reputable guidebook is essential to successful bird watching. Alternatively, Cornell University recently published the Merlin Bird ID App, which can save time and guide you through the traditional identification process.

Over 360 wading, land and predatory bird species roost in Everglades National Park. Most-spotted birds include the Wood Stork, the Great Egret, and the Roseate Spoonbill. One great way to discover the best birding hot spots is to take a guided tour by boat or kayak. From this vantage, you can capture memorable photos and learn from your expert guide. The Gulf Coast Visitor Center and Everglades National Park entrance is only one hour from the Naples Grand Beach Resort.

The 13,000-acre Audubon Corkscrew Swamp Sanctuary was named one of the best bird-watching destinations by BirdWatchingDaily.com and is just over one half-hour from the Naples Grand Beach Resort. Not only a safe retreat for nearly 200 bird species, including the Sandhill Crane, Snowy Egret, Tri-Colored Heron and White Ibis— this beautiful vantage also offers guided tours, conservation programs and events, rare plant life like the ghost orchid and habitats for unique animals such as the Florida panther, American alligator and Florida black bear.

Touted as one of the best locations to bird watch because of its diverse ecosystems: open prairies, hardwood hammocks, pinelands, cypress swamps and estuaries, Big Cypress National Preserve also boasts a birding brochure and checklist, and is less than one hour from the Naples Grande Beach Resort. Here, you’ll often find the Least Bittern, the White-Tailed Kite and the Limpkin. Explore each of the five habitats and see how many species you can observe.

With over 6400 acres of preserve and 245 species of birds, bird-watchers won’t want to miss the sights just one hour to the north of the Naples Grande Beach Resort. Bordering the Gulf of Mexico on Sanibel Island, Ding Darling National Wildlife Refuge offers sights of the American White Pelican, the Mangrove Cuckoo and the Yellow-Crowned Night Heron, as well as a wildlife drive full of endangered species and beautiful beach views.

Naples Grande Reviews, News and Articles
Top 5 Reasons to Have Your Destination Wedding at Naples Grande
Explore Naples, Florida with Your Family